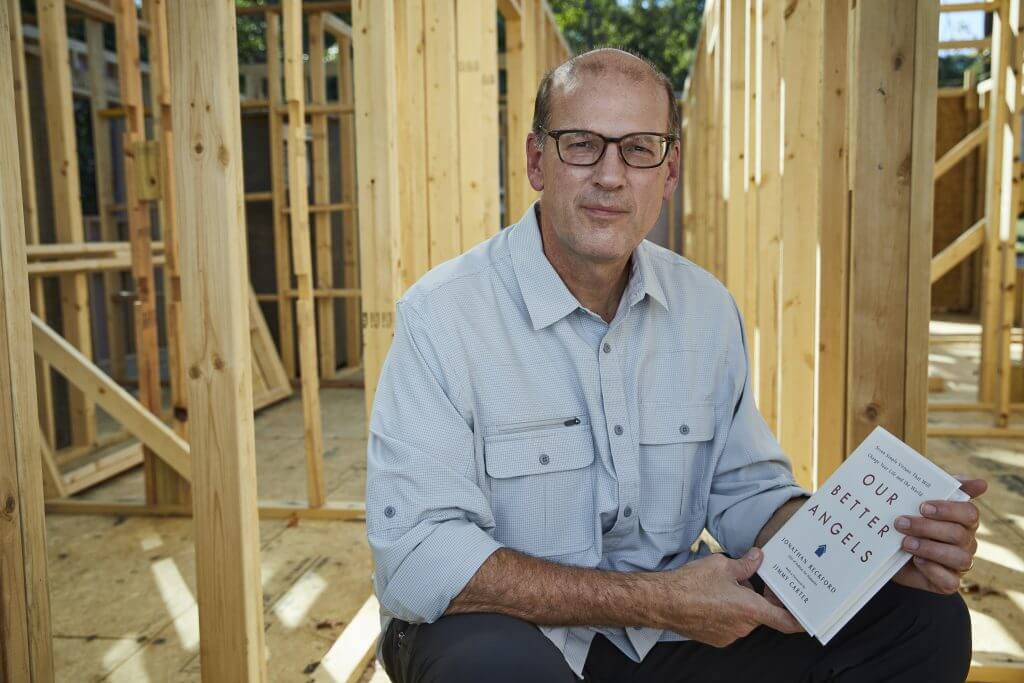 In Our Better Angels, Reckford shares seven timeless virtues that he believes can change the world, inspired by stories from his work with Habitat for Humanity. The book was inspired by an essay written by Jimmy Carter following Hurricane Harvey in which the former president called on us to seek out our better angels in turbulent times. President Carter provides a moving foreword to the book.

“Rosalynn and I have always believed in doing whatever we can for as long as we can to help those around us and to change this world for the better,” President Carter wrote. “One of the ways we’ve been able to do that most consistently has been through our involvement with Habitat for Humanity. This book is full of the kind of transformative stories that we’ve seen again and again in our more than thirty-five years of building with them around the world.”

Habitat MCTX has been working in Montgomery County since 1989, and has helped countless families secure safe, decent and affordable homes.

During his time as CEO of the leading global housing nonprofit, Reckford has seen firsthand how simple acts have the power to change lives around the world. Reckford presents the virtues—kindness, community, empowerment, joy, respect, generosity and service—and shares uplifting stories to inspire hope and change within people and their communities. The stories in Our Better Angels will resonate with readers across a wide spectrum of readers who are yearning for compassion and community in a time of division and divisiveness.

“In a world that is divided and disconnected—where so many are struggling with problems seen and unseen—these virtues answer the question of what we owe each other,” Reckford said. “This book helps readers find their own better angels and then go out to make their neighborhood, community or workplace a brighter place.”

Reckford’s proceeds from Our Better Angels will go directly to Habitat for Humanity to support their work in the United States and around the world.

Our Better Angels is on sale Oct. 8 and is published by St. Martin’s Essentials. For more information or to purchase the book, visit habitat.org/betterangels.

Jonathan Reckford has served as chief executive officer for Habitat for Humanity International since 2005. Under his leadership, the global housing organization has grown from serving 125,000 individuals per year to more than 8.7 million people in 2018 alone. A graduate of the University of North Carolina at Chapel Hill, Reckford earned his MBA from Stanford and went on to managerial positions at various Fortune 500 companies. Reckford also served as executive pastor of Christ Presbyterian Church in Edina, Minnesota.     In 2017, Reckford was named Influencer of the Year by The NonProfit Times.

PRAISE FOR OUR BETTER ANGELS

“Our Better Angels brings to light the basic virtues of kindness, generosity, respect, empowerment, community, joy, and service that we all have within us. We are grateful to Jonathan Reckford for sharing such moving stories about transformation, and for showing how easy it is for all of us to choose to help and strengthen others, rather than to hurt and weaken them. This book is for humanity: Read it whether you’re a kid, a grandparent, or anyone in between. It will spark an instant realization of how even the smallest acts of kindness or respect can fundamentally change someone’s path for the better.” – Drew and Jonathan Scott, The Property Brothers

“It has been our honor to work with Habitat for Humanity and see these seven virtues in practice. When we look outside of ourselves, we experience a glimpse of who we can be. Jonathan’s book reminds us to love one another. Amazing things happen when we do!” – Trisha Yearwood and Garth Brooks